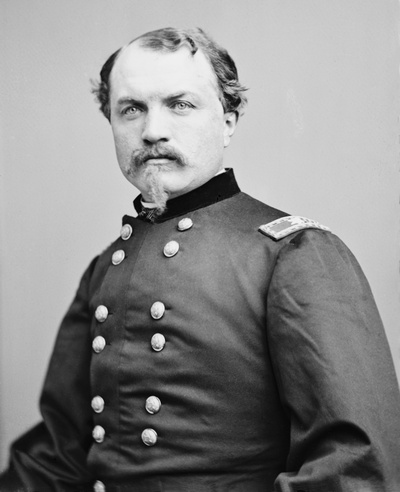 Averell was born in Cameron, New York. As a boy he worked as a drugstore clerk in the nearby town of Bath, New York. He graduated from the United States Military Academy at West Point in 1855 and was commissioned a second lieutenant in the U.S. Army Mounted Rifles. His early assignments included garrison duty at Jefferson Barracks, Missouri, and the U.S. Army Cavalry School in Carlisle, Pennsylvania. During two years of service in the southwestern United States, he was wounded in action against the Indians in 1859 and was placed on the disabled list until the outbreak of the Civil War.  After the capture of Fort Sumter, Lt. Averell made a risky solo journey across the country to the New Mexico Territory with a message to summon his old mounted rifle regiment back east to join the fighting.

Averell first saw action at the First Battle of Bull Run while acting as assistant adjutant general to Brig. Gen. Andrew Porter. In August 1861, he was appointed colonel of the 3rd Pennsylvania Cavalry regiment, which he led through the Peninsula Campaign and the Seven Days Battles. Immediately after that campaign, on July 6, 1862, he was given command of the 1st Cavalry Brigade in the Army of the Potomac. He missed the Battle of Antietam and most of the Maryland Campaign as he recovered from a bout of malaria that was known at the time as “Chickahominy Fever”. As Confederate Maj. Gen. J.E.B. Stuart’s cavalry rode around the Union Army and raided Chambersburg, Pennsylvania, Averell returned in time to lead his brigade in pursuit. President Abraham Lincoln appointed Averell a brigadier general of volunteers on September 26, 1862 to rank from that date. Lincoln had to nominate Averell three times before the U.S. Senate confirmed the appointment on March 11, 1863.

During the Battle of Fredericksburg, Averell commanded the Cavalry Brigade of the Center Grand Division of the Army of the Potomac. He ascended to division command—the 2nd division of the Cavalry Corps—on February 12, 1863. His division fought the first engagement in which Union cavalrymen claimed victory against their Confederate counterparts, the Battle of Kelly’s Ford on March 17, 1863. But the 2nd Division’s reputation was diminished as it participated in Maj. Gen. George Stoneman’s fruitless cavalry raid in the Battle of Chancellorsville six weeks later. On May 2, 1863, army commander Maj. Gen. Joseph Hooker relieved Averell of his command due to his slow performance during the raid. Hooker sent an angry telegram to the War Department informing them that Averell “seems to have contented himself between April 29 and May 4 with having marched … 28 miles, meeting no enemy deserving of the name, and from that point reporting to me for instructions.”

Averell left the Army of the Potomac after his relief at Chancellorsville and fought a series of minor engagements in the Department of West Virginia at the brigade and division level. In November 1863, he conducted what is called Averell’s West Virginia Raid against the Virginia and Tennessee Railroad. He received a brevet promotion to lieutenant colonel in the regular army for the Battle of Droop Mountain in West Virginia on November 6, 1863, and to colonel for actions at Salem, Virginia, on December 15, 1863. In the spring of 1864, he led another cavalry raid toward Saltville but was stopped by Generals John Hunt Morgan and William E. “Grumble” Jones at Cove Gap. Returning to West Virginia, he later commanded a cavalry division under Maj. Gen. David Hunter in his failed raid on Lynchburg.

At a time when Lt. Gen. Jubal Early had invaded Maryland and defeated a series of Union commanders, Averell proved to be the only Union commander to achieve victory against the Confederates in the Shenandoah Valley. He routed Confederate Maj. Gen. Stephen D. Ramseur at the Battle of Rutherford’s (Carter’s) Farm on July 20, inflicting 400 casualties and capturing a four-gun battery, in spite of Averell’s being significantly outnumbered. When Brig. Gen. John McCausland burned Chambersburg, Pennsylvania, to the ground on July 30, Averell tracked him down at Moorefield, West Virginia. Using intelligence gathered from his scouts, Averell routed McCausland in a sunrise attack upon the Confederate camp capturing hundreds of prisoners and another four-gun battery.

During the Valley Campaigns of 1864 against Early, Averell fought under Maj. Gen. Philip Sheridan. He was relieved of command a second time in his career on September 23, 1864, following a dispute with Sheridan about Averell’s actions at the Battle of Fisher’s Hill. This incident truly devastated him and he could not hide his misery. A staff officer wrote “I saw General Averell sitting in front of his tent … He was dreadfully depressed and broken. I believe he started for the rear within a few moments after we left him, and never was employed again during the war.” Averell resigned from the Union Army volunteers and from the U.S. regular army on May 18, 1865.

On July 17, 1866, President Andrew Johnson nominated Averell for appointment to the grades of brevet brigadier general and brevet major general in the regular army, to rank from March 13, 1865, and the U.S. Senate confirmed the appointments on July 23, 1866. The latter appointment was in recognition of Averell’s actions at the Battle of Kelly’s Ford.

Following the Civil War, President Johnson appointed Averell as U.S. consul general to British North America (1866–1869). In later life, his skill as an inventor of practical devices provided him with a handsome income. Among his inventions were methods for manufacturing steel castings and insulated electrical cable. He is most famous as the inventor of American asphalt pavement. He was the author of Ten Years in the Saddle (1978) and co-author of History of the Third Pennsylvania Cavalry, 60th Regiment Pennsylvania Volunteers (1905), both published posthumously.  General Averell died in Bath, New York, and is buried there.