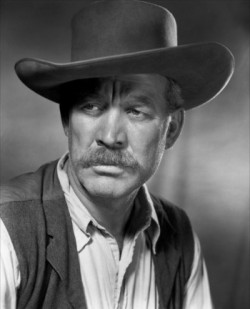 Ward Bond was a football player at the University of Southern California when, together with teammate John Wayne, he was hired for extra work in the silent film Salute (1928), directed by John Ford. Both Bond and Wayne continued in films, but Bond never achieved the fame and notoriety that was afforded Wayne. Ward Bond received numerous small roles and bit parts, playing character roles throughout the 1930s, including the role of “Tom,” a Yankee captain, in Gone with the Wind (1939). He received some attention for his role as the murderous “Cass” in John Ford’s Young Mr. Lincoln (1939). Bond appeared in numerous Ford films during the 1940s, appearing alongside his famous friend, John Wayne. Some of the films he appeared in during this period were, The Maltese Falcon (1941), Tall in the Saddle (1944), They Were Expendable (1945), My Darling Clementine (1946), and Fort Apache (1948). His role as “Officer Bert” in It’s a Wonderful Life (1946), inspired Jim Henson to name one of his most famous Muppets after Bond’s character (Bert, of Bert and Ernie fame). A starring role in Ford’s Wagonmaster (1950), led to Bond’s most lasting professional role, his continuing part as trail master Seth Adams on the hit NBC television series Wagon Train, which debuted in 1957. Bond even saw to it that Ford directed one episode in which John Wayne had a bit role, billed under his real name of Marion Michael Morrison. Bond stayed with Wagon Train for three seasons and Wagon Train was NBC’s number one series when Bond unexpectedly died of a heart attack.