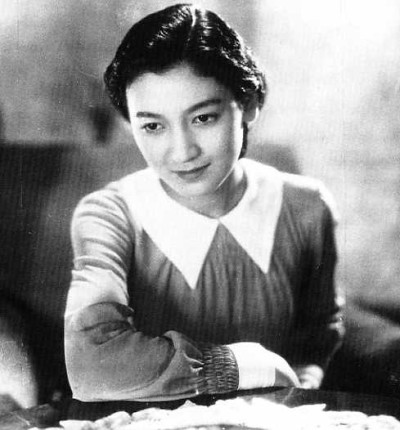 Setsuko Hara was born Masae Aida (会田 昌江 Aida Masae?) in what is now Hodogaya-ku, Yokohama in a family with three sons and five daughters. Her elder sister was married to film director Hisatora Kumagai, which gave her an entry into the world of the cinema and she went to work for Nikkatsu Studios in Tamagawa, outside Tokyo, in 1935. Her debut was at the age of 15 in Do Not Hesitate Young Folks! (ためらふ勿れ若人よ tamerafu nakare wakōdo yo?) Hara came to prominence as an actress in the 1937 German-Japanese co-production Die Tochter des Samurai (The Daughter of the Samurai), known in Japan as Atarashiki Tsuchi (The New Earth), directed by Arnold Fanck and Mansaku Itami. In the film, Hara plays a maiden who unsuccessfully attempts to immolate herself in a volcano. She continued to portray a tragic heroine in many of her films until the end of World War II. Hara starred in Akira Kurosawa’s first post-war film, No Regrets for Our Youth (1946). She also worked with director Kimisaburo Yoshimura in A Ball at the Anjo House (1947) and Keisuke Kinoshita in Here’s to the Girls (1949). In all of these films, she was portrayed as the “new” Japanese woman, looking forward to a bright future. However, in most of her movies, especially those directed by Yasujirō Ozu and Mikio Naruse she plays the typical Japanese woman, either as daughter, wife, or mother. Hara’s first film (of six) with Yasujirō Ozu was Late Spring (1949), and their collaboration would last for the next twelve years. In Late Spring, she plays Noriko, a devoted daughter who prefers to stay at home and take care of her father than to marry, despite the urgings of her family members. In Early Summer (1951), she played an unrelated character also called Noriko who wanted to get married, and finding the courage to do so without her family’s approval. This was followed by Tokyo Story (1953), perhaps her (and Ozu’s) best known film, in which she played a widow, also called Noriko whose husband was killed during the war, and her devotion to her dead husband worries her in-laws, who insist that she should move on and remarry.

Setsuko Hara’s last major role was Riku, wife of Ōishi Yoshio, in the film Chushingura (1962). Hara, who never married, is called “the Eternal Virgin” in Japan and is a symbol of the golden era of Japanese cinema of the 1950s. She quit acting in 1963 (the year Ozu died), and subsequently led a secluded life in Kamakura, where many of her films with Ozu were made, refusing all interviews and photographs. For years, people would speculate about her reasons for leaving the public eye. Hara herself confessed during her final press conference that she never really enjoyed acting and was only using it as a means to support her family; however, many people continued to speculate over her possible romantic involvement with director Ozu, or the possibility that she had failing eyesight. After seeing a Setsuko Hara film, the novelist Shūsaku Endō wrote: “We would sigh or let out a great breath from the depths of our hearts, for what we felt was precisely this: Can it be possible that there is such a woman in this world?” After more than half a century of seclusion, Hara died of pneumonia at a hospital in Kanagawa prefecture, Japan, on September 5, 2015, at the age of 95. Her death was not reported by the media until November 25, 2015. The anime film Millennium Actress (2001), directed by Satoshi Kon, is partly based on the life of Hara.