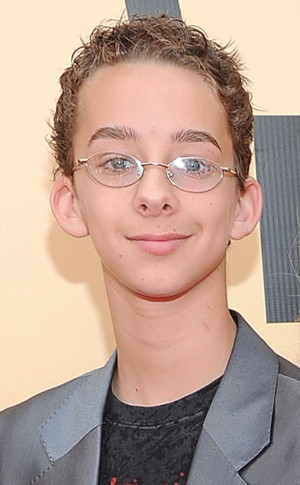 Gathering at a funeral home in Riverside, California, approximately 200 family and friends stood in silence as six pallbearers – including the former Everybody Loves Raymond actor‘s twin brother Sullivan and his stepfather Jerry Gini – loaded Sawyer’s casket into a hearse trailer attached to a motorcycle.

“He loved his Harley-Davidson,” Gini and his wife Elizabeth told PEOPLE in the days after Sawyer shot and killed himself while visiting family in Texas, and the Ginis made certain that their son’s farewell celebrated all the things that he loved.

Most of those in attendance Sunday wore blues and greens because they were Sawyer’s favorite colors.

His aunt, Ashley Antonissen, wore a shirt with a cat on it because, as she told the crowd at the celebration of life, “Sawyer really loved cats, like, a lot.”

His sister Maysa, 16, called him “my brother, my friend, and more often than not, my father…[and now] my guardian angel.”

Sullivan had dyed his hair blue in honor of his twin and joked that Sawyer “could be mean sometimes, but he was my brother.”

But it was Sawyer’s mother, Elizabeth Gini, who gave the moving final tribute:

“Dearest, precious son. How do I begin to summarize 20 years of loving you with mere words. Please forgive me, son, if I stumble through this as these waters are uncharted and my heart is so heavy.

“My heart was filled with anticipation and love, but in the back of my being there was also fear. I was fearful of losing you, but I pushed those feelings deep down and found delight in carrying you.

“As I watched you grow, that feeling that I was on borrowed time would nag at me but I would send it away and continue to be the best mommy I could to you.

“I took great pleasure in watching you interact with your brother and holding you both on my hips, giggling that you each put your hand on my shirt and held the opposite breast just to be close to me.

“Later, those little hands would walk up and land on my leg and let me know that you needed me but not to interrupt while I was in conversation.

“A little later, those hands held my arms each night as you slept in my bed while I was alone in raising you. You kept track of who got to sleep next to me and would argue and eventually I learned to sleep in the middle to be close to both of you.

“As you grew a little more, those hands would wrap around me every time you came near me. In the morning after sleeping, each day after school, or even just when passing me in the hall.

“These hands held each new sibling that you welcomed with anxious anticipation. And as they grew, your hands colored, read, played and comforted each new baby sister.

“And as I watched you grow into a man, I saw your hands become more than I expected. Your open arms welcomed all manner of family and friends. You were always there to help and comfort those around you and your smile and goofy faces put everyone at ease.

“I’m grateful for all my memories and every moment we shared. You confided your hopes and dreams in me and I encouraged you along the way… You were wise beyond your years and in moments that I needed to apologize for losing my temper or when I felt I had overstepped my boundaries in guiding an adult child, you said, ‘You don’t ever have to apologize for being a mom.’

“I will miss sending and receiving funny cat videos, your hugs, our talks. But most of all, I’ll miss your little hands holding mine. They are forever printed in my heart.

“My physical time with you is over now. So, son, you put those hands that I held for 20 years, one on your baby sister, and one in God’s hand, and guide her along this journey until I can hold you both again.

“And tell God, ‘Thank you’ for me. And tell him how grateful, lucky, and privileged I feel that he chose me to be your mom and I hope I made him proud. And I will help guide those who you left behind until we are called up to be with you.