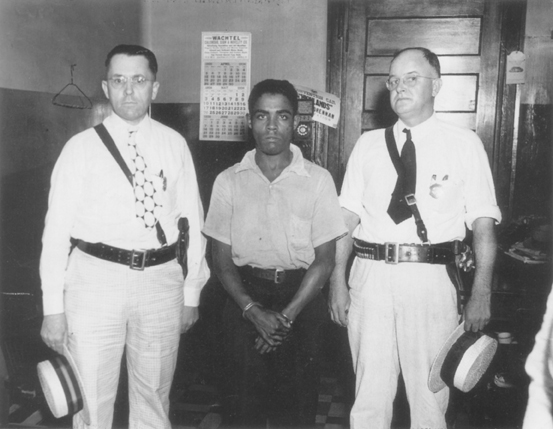 Criminal. He was the last person to be publicly executed in America.  Born ca. 1909-1913 in Roanoke, Virginia, Bethea, a young African-American, moved to Owensboro, Kentucky, in order to find work in the tobacco fields.  Local police charged him with various petty offenses, but in 1935, he was convicted of stealing a purse and sentenced to two years in the Kentucky State Penitentiary.  While on parole, he committed the crime that led to his execution.  On June 8, 1936, while intoxicated, he crawled up an awning and entered the home of Mrs. Lischia Edwards, who rented an upstairs bedroom at the corner of Fifth and Crittenden Streets.  Bethea opened her second-story window and crawled into her bedroom, where he robbed her of jewelry, raped her, and strangled her to death.  In 1936, Kentucky law permitted juries to sentence defendants convicted of rape to death by public hanging, to be performed by the county sheriff.  The prosecutor charged him only with rape (not murder, robbery, burglary, or theft) in order to avoid the legal question of whether Bethea would die by hanging or electrocution, which was Kentucky’s method of execution for all other death-eligible crimes.  The case drew national attention because the Sheriff of Daviess County was Mrs. Florence Thompson, who had succeeded her husband in office after he died unexpectedly of pneumonia in April of 1936.  Journalists from across the country converged on Owensboro on August 14, 1936, expecting to report that the first woman in United States history had hanged a man.  Thompson, however, had secretly made arrangements with Arthur Hash, a former Louisville police officer, to spring the trap door on the gallows.  Disappointed, journalists reported that the hanging was a Roman Holiday, with a carnival-like atmosphere.  Numerous eyewitnesses, however, dispute the newspaper accounts and state that those present at the hanging were transfixed by the solemnity of the moment.  Embarrassed by the news reports, the Kentucky General Assembly abolished public hangings in 1938, making the Bethea hanging the last public execution in America.  The case is not an example of a racially-motivated railroading because the evidence against Bethea was substantial.  Bethea left a celluloid ring and fingerprints which police traced to him.  During his five confessions, he told police where he had hidden the jewelry he stole from Edwards in a barn, and officers found the jewelry there.  Police also found the victim’s blood in his pubic area and underwear, obtained during the violent rape. (bio by: Perry Ryan)