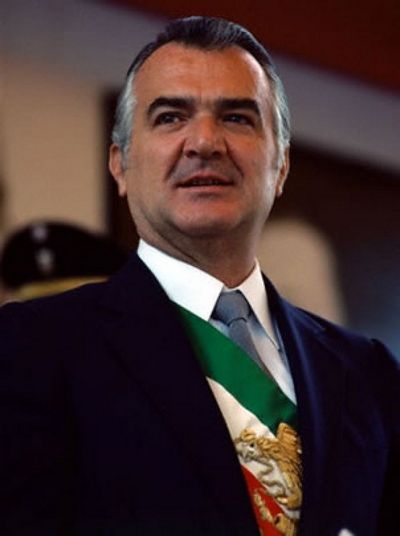 He worked for Mexico’s central bank and lectured in law at UNAM before securing a position at the Secretariat of Finance in 1965. Between 1970 and 1972 he was employed by Petróleos Mexicanos, Mexico’s state-owned petroleum company, after which he held several other bureaucratic posts in the government of Luis Echeverría. In 1976 he was chosen to serve in José López Portillo’s cabinet as secretary of budget and planning.  He was president after López Portillo. He won the elections that took place on July 4, 1982, and took office the following December.  He was a member of Collegium International, an organization of leaders with political, scientific, and ethical expertise whose goal is to provide new approaches in overcoming the obstacles in the way of a peaceful, socially just and economically sustainable world.

Unlike previous Mexican leaders, he was a market-oriented President, and his time in power was one of the most difficult periods of the country because of his predecessors’ policies, as well as the decreasing demand for oil. Inflation increased on an average of 100% a year (culminating to an unprecedented level of 159% in 1987). Unemployment rates soared to as much as 25% during the mid-1980s, income declined and economic growth was erratic. This became a stark reminder of the gross mismanagement and inept policies of the administrations in the 1970s, particularly the financing of development with excessive borrowing from abroad.

During his presidency, de la Madrid introduced neoliberal economic reforms that encouraged foreign investment, widespread privatisation of outdated state-run industries, and reduction of tariffs, a process that continued under his successors, and which immediately caught the attention of the International Monetary Fund (IMF) and other international observers. In 1986, Mexico entered the General Agreement on Tariffs and Trade (GATT) treaty, following its efforts at reforming and decentralising its economy. All told, the number of state-owned industries went down from approximately 1,155 in 1982 to 412 in 1988.

As an immediate reaction to the economic crisis, de la Madrid first presented the Immediate Economic Reorganization Program (Programa Inmediato de Reordenación Económica) and a couple of months later the National Development Plan (Plan Nacional de Desarrollo). The measures proposed were inter alia: a reduction of public spending, fiscal reforms, re-structuring the bureaucracy, and employment protection.  His administration’s mishandling of the infamous 1985 earthquake in Mexico City damaged his popularity because of his initial refusal of international aid. It placed Mexico’s delicate path to economic recovery in an even more precarious situation, as the destruction also extended to other parts of the country.

Cuauhtémoc Cárdenas and other politicians from the Institutional Revolutionary Party (PRI) announced the creation of the Democratic Current (Corriente Democrática) within the PRI. The Democratic Current demanded the establishment of clear rules for the selection of the party’s presidential candidate. When they failed, Cuauhtémoc Cárdenas and Porfirio Muñoz Ledo left the PRI and joined the National Democratic Front (Frente Democrática Nacional), a loose alliance of left-wing parties.  Galloping inflation, the controversial privatisation programme and austerity measures imposed by his administration caused the ruling party to lose ground, leading up to the controversial elections of 1988. On Election Day 1988, a system shutdown occurred (“se cayó el sistema”). When the system was restored, Carlos Salinas was declared the winner. The expression “se cayó el sistema” (the system crashed) became a euphemism for electoral fraud.

De la Madrid died on April 1, 2012, at 7:30am in a Mexican hospital apparently following a lengthy hospitalization for complicated chronic obstructive pulmonary disease, which led to acute renal failure and cardiac arrest.