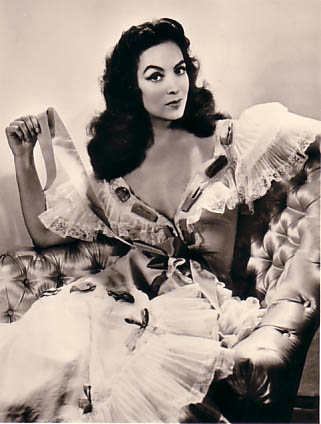 Ms. Felix was the foremost Mexican film star. She was world renowned for her beauty  and glamorous style.  Ms. Felix was the inspiration many poets, writers, and painters such as, Diego Rivera, with who she maintained a love affair.  She made 47 films in countries such as Mexico, France, Italy, Spain, and Argentina.  Ms. Felix live half of the year in Mexico City and the other half in Paris, France.  In 1996 France awarded her the nation’s highest distinction, the National Order of Arts and Letters. Also, she won four Ariels, the Mexican equivalent of the Oscars.  Some of her most famous movies are “Tizoc”, “Enamorada”, “La Generala”, and “Dona Barbara”.  Ms. Felix was often called “La Dona” or the Dame which she earned when she starred in “Dona Barbara”.  She had a son, Enrique Alvarez Felix who died in 1996.  Ms. Felix died in her sleep of a heart attack.  She was buried at El Panteon Frances in Mexico City. (bio by: Rodolfo Martinez)  Family links:  Children:  Enrique Alvarez Felix (1935 – 1996)* *Calculated relationship