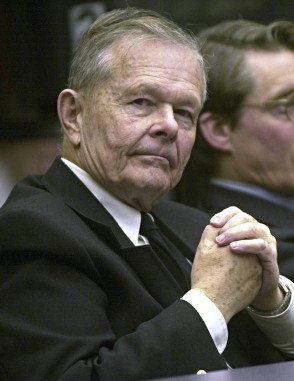 John Geoghan (/ˈɡeɪɡən/; June 4, 1935 – August 23, 2003) was an American Roman Catholic priest who sexually abused children while he was assigned to parishes in the Boston Archdiocese of Massachusetts. He was reassigned several times to parish posts involving children, including after attempted treatment for pedophilia. The investigation and prosecution of Geoghan was one of numerous cases of priests accused of sexual abuse in a scandal that rocked the archdiocese in the 1990s and 2000s. It led to the resignation of Boston’s archbishop, Cardinal Bernard Francis Law, on December 13, 2002, as he was accused of protecting dozens of priests by reassignment, thus allowing abuse of additional parish children to take place. Law lost the support of his priests and laity. Geoghan was finally convicted of sexual abuse, laicized, and sentenced in 2002 to nine to ten years in Souza-Baranowski Correctional Center, a maximum-security prison. Less than a year later, he was murdered there by Joseph Druce, an inmate who is serving a life sentence. The Boston Globe’s coverage of Geoghan’s abuse opened the door for public knowledge of the sexual abuse scandal in the Catholic archdiocese of Boston and sexual abuse by priests in the USA in general. This coverage is a key plot element of the movie Spotlight that was released in 2015.

Over a 30-year career in six parishes, John Geoghan was accused of sexual abuse involving more than 130 boys. He was prosecuted in Cambridge, Massachusetts for charges of molestation that took place in 1991. Geoghan was defrocked in 1998 by Pope John Paul II. He was found guilty in January 2002 of indecent assault and battery for grabbing the buttocks of a 10-year-old boy in a swimming pool at the Waltham Boys and Girls Club in 1991, and was sentenced to nine to ten years in prison. After initially agreeing to a $30 million settlement with 86 of Geoghan’s victims, the Boston archdiocese pulled out of it, finally settling with them for $10 million. Boston’s Suffolk County prosecuted Geoghan in two other sexual abuse cases. One case was dropped without prejudice when the victim decided not to testify. In the second case, a judge dismissed conviction of Geoghan in two rapes, after hotly contested arguments, because the statute of limitations had run out. The Commonwealth’s appeal of that ruling was active at the time of Geoghan’s death. Remaining charges of indecent assault in that case were still pending prosecution.

On August 23, 2003, while in protective custody at the maximum-security Souza-Baranowski Correctional Center in Shirley, Massachusetts, John Geoghan was strangled and stomped to death in his cell by inmate Joseph Druce. The latter was a self-described white supremacist serving a sentence of life without possibility of parole for killing a man who allegedly made sexual advances toward him. He was said to have planned the murder of Geoghan for more than a month, considering him a “prize.” The press raised questions about prison officials’ judgment in placing these two men in the same unit for protective custody. In addition, they had been warned by an inmate that Druce had something planned against Geoghan. A Worcester, Massachusetts jury found Druce guilty of first-degree murder on January 25, 2006, after the jury rejected his insanity defense. Druce was sentenced a second time to life in prison without the possibility of parole. A video, which shows correction officers trying to open Geoghan’s prison door, which Druce had wedged shut when he attacked the former priest, was released on YouTube in June 2007. Officials claim not to know how the video, recorded by the prison surveillance systems, was made public. John Geoghan was buried in Holyhood Cemetery in Brookline, Massachusetts on August 28, 2003.