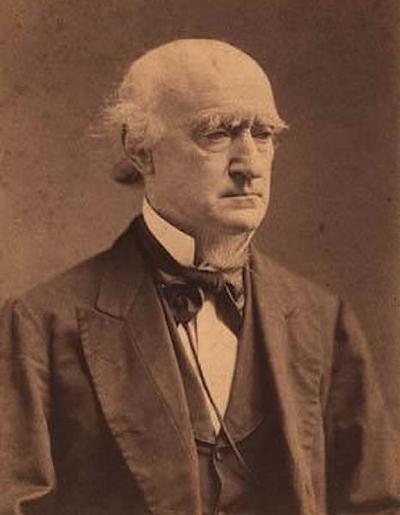 Campbell was born near Washington, Georgia, to Col. Duncan Greene Campbell (for whom the now-defunct Campbell County, Georgia was named). Considered a child prodigy, he graduated from the University of Georgia in 1825 at the age of 14, and immediately enrolled at the United States Military Academy for three years and would have graduated in 1830, but withdrew upon the death of his father (July 1828) and returned home to Georgia. He read law with former Georgia governor John Clark, and was admitted to the bar in 1829, at the age of 18 which required a special act of the Georgia legislature.

While at the United States Military Academy in West Point, New York, on 24–25 December 1826, Campbell was involved in the Eggnog Riot also known as the “Grog Mutiny”. Proceedings began on December 26, 1826, courts-martial was complete on 16 March 1827, and ended on May 3, 1827, with the President adjusting some of the verdicts and approving of the rest. Campbell was among 70 cadets that were involved but a review concluded that only 20 (one soldier) be charged. Many notable cadets such as Jefferson Davis (involved but not charged), and Robert E. Lee (not involved but testified), were involved in the incident. Nine expulsions were approved by President John Quincy Adams. There was a call for Campbell to be expelled, along with James W. M. “Weems” Berrien (remittance allowed) but this was rejected so Campbell escaped court martial.

Campbell later moved to Alabama, establishing a practice in Montgomery. There he married Anne Goldthwaite and, in 1836, was elected to the Alabama House of Representatives. In 1839 he moved to Mobile and resumed private practice, but was elected again to the state legislature in 1843. Campbell was twice offered appointment to the Alabama Supreme Court, but declined on both occasions. While in Alabama, Campbell was made a colonel in the Creek War.

In 1852, Campbell was an attorney for Myra Clark Gaines against Richard Relf before the Supreme Court.  In 1852 the death of John McKinley created a vacancy on the Supreme Court. President Millard Fillmore, a Whig, made three nominations to fill the vacancy, all of whom were denied confirmation by the Democratic-controlled Senate. After the election of Franklin Pierce, a Democrat, a group of sitting Supreme Court justices approached Pierce to recommend Campbell as a nominee; this is one of the few known times sitting justices have made recommendations for new nominations. Pierce, who was hoping to stave off insurrection by appeasing the South, agreed to nominate the Alabaman Campbell. The nomination was made on March 21, 1853, and was approved by the Senate on the same day.

In March and April 1861, at the outbreak of the American Civil War, Campbell tried to serve as a mediator between three commissioners representing the Confederacy (Martin Crawford, Andre Roman, and John Forsyth, Jr.), and the Lincoln administration. The commissioners were sent to settle any disputes arising from the secession of the southern states, but President Lincoln, denying that secession was valid, refused any official contact with them.

The commissioners then turned to Campbell, who privately carried their proposals to Secretary of State William H. Seward and Secretary of War Simon Cameron. Neither Seward nor Cameron responded.  According to John G. Nicolay, one of Lincoln’s private secretaries and a later biographer of him, “Failing in this direct application, they made further efforts through Mr. Justice Campbell of the Supreme Court… who came to Seward in the guise of a loyal official, though his correspondence with Jefferson Davis soon revealed a treasonable intent.”

After the Confederate bombardment of Fort Sumter and Lincoln’s proclamation of a state of rebellion, Campbell resigned from the Court on April 30, 1861, and returned to Alabama. A year later he was named Assistant Secretary of War by Confederate president Jefferson Davis. He held that position through the end of the war.  Campbell was one of the three Confederate Peace Commissioners (along with Alexander H. Stephens and Robert M. T. Hunter), who met with Abraham Lincoln and William H. Seward at the Hampton Roads Conference (1865) in an unsuccessful attempt to negotiate an end to the Civil War.

After the fall of Richmond in 1865, Campbell was arrested and imprisoned at Fort Pulaski, in Georgia, for six months. After his release, he was reconciled and resumed his law practice in New Orleans, Louisiana. In this private practice he argued a number of cases before the U.S. Supreme Court including the Slaughterhouse Cases and a number of other cases designed to obstruct Radical Reconstruction in the South.

Campbell was a member of the “Committee of One Hundred” that went to Washington to persuade President Grant to end his support of what they called the “Kellogg usurpation”. Grant had sent troops to support Governor William Pitt Kellogg of Louisiana. Grant initially refused to meet them but later relented. Campbell stated the case before Grant but was refused.  Campbell died in 1889.