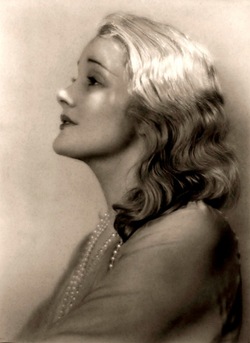 Actress. She was a former Ziegfeld Follies Girl who went on to greater fame on Broadway and in the emerging medium of sound films. Born Eugenia Eagles, the second of six children, she moved with her family at the age of 2 to Kansas City, Missouri where she often appeared in Kansas City pageants and festivals. When she was 10 years old, her father died and she quit school to work in a department store to help support her family. At the age of 15, she left home and toured the Midwest with the Dubinsky Brothers’ traveling theater show, first as a dancer, but later she went played the leading lady in several comedies and dramas put on by the Dubinskys. She married Morris Dubinsky, who frequently played the villain roles. Around 1911 she moved to New York City, New York, working in chorus lines and eventually became a Ziegfeld Girl. Her hair color was naturally brown but she bleached it when she went to New York. She changed the spelling of her name from Eagles to Eagels because she thought it looked better in lights. She was in the supporting cast of “Mind The Paint Girl” at the Lyceum Theatre in September 1912 and played opposite George Arliss in three successive plays in 1916 and 1917. In 1915 she appeared in her first motion picture “House of Fear” and the following two years made three films for Thanhouser Film Corporation, “The World and the Woman (1916), “The Fires of Youth” (1917), and “Under False Colors” (1917). In 1918 she appeared in the film “The Cross Bearer” and the following year she did “The Madonna of the Slums.” In 1922, she made her first appearance as a star in the play “Rain,” by John Colton, based on a short story by W. Somerset Maugham. She played her favorite role, that of Sadie Thompson, a free-wheeling and free-loving spirit who confronts a fire-and-brimstone preacher on a South Pacific island and the critics hailed her portrayal as sensational. She toured with “Rain” for two more seasons and returned to Broadway to give a farewell performance in 1926. In 1925 she married Edward Harris “Ted” Coy, a former Yale University football star turned stockbroker and they divorced three years later. In 1926 she was offered the part of Roxie Hart in Maurine Dallas Watkins’s play “Chicago,” but she walked out of this role during rehearsals. She next appeared in the comedy “Her Cardboard Lover” (1927) with actor Leslie Howard and toured with the show for several months. After missing some performances due to ptomaine poisoning, she returned to the cast in July 1927 for an Empire Theater show. After a season on Broadway, she took a break to make a movie, appearing opposite John Gilbert in the MGM film “Man, Woman and Sin” (1927). When she failed to appear for a performance at Milwaukee, Wisconsin in 1928, she was banned by Actors Equity from appearing on stage for 18 months. However, the ban did not prevent her from working in film, and she made two “talkies” for Paramount Pictures, “The Letter” and “Jealousy” (both 1929). Just before she was to return to the Broadway stage in a new play, she died suddenly upon visiting a private hospital in New York City, New York, at the age of 39. Medical examiners disagreed on the cause of death; there were three separate coroner’s reports, all reaching different conclusions, but the available evidence pointed to the effects of alcohol, a tranquilizer, or heroin. She was posthumously nominated for the third annual Academy Award for Best Actress for her role in “The Letter,” the first posthumous Oscar consideration for any actor. The Oscar ended up going to Mary Pickford for the film “Coquette.” In 1957, a mostly fictionalized film biography titled “Jeanne Eagels” was made by Columbia Pictures, starring actress Kim novak as Eagels.