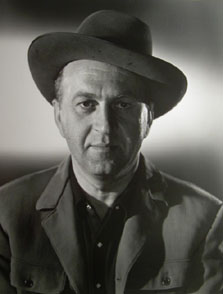 Da Silva appeared in a number of Broadway musicals, including the role of Larry Foreman in the legendary first production of Marc Blitzstein’s musical, The Cradle Will Rock (1937). Later, he costarred in the original 1943 stage production of Rodgers and Hammerstein’s Oklahoma!, playing the role of the psychopathic Jud Fry. He was the easygoing Ben Marino who opposed Tammany Hall in the Pulitzer winning musical Fiorello!.

In 1969, Da Silva originated the role of Benjamin Franklin in the musical 1776. Four days before the show opened on Broadway, he suffered a minor heart attack but refused to seek medical assistance because he wanted to make sure critics saw his performance. After the four official critic performances were over, the cast left to go to the cast party and Da Silva went to the hospital and immediately took a leave of absence from the production. While Da Silva recuperated, his understudy, Rex Everhart, took over the role and performed on the cast recording. Da Silva was able to reprise his role in the 1972 film version and appeared on that soundtrack album.  Da Silva did summer stock at the Pine Brook Country Club, located in the countryside of Nichols, Connecticut, with the Group Theatre (New York) formed by Harold Clurman, Cheryl Crawford and Lee Strasberg in the 1930s and early 1940s.

Da Silva appeared in over 60 motion pictures. Some of his memorable roles include a leading mutineer in The Sea Wolf (1941), playing Ray Milland’s bartender in The Lost Weekend (1945) and the half-blind criminal “Chicamaw ‘One-Eye’ Mobley” in They Live by Night (1949). He also released an album on Monitor Records of political songs and ballads entitled Politics and Poker.  In the 1950s, after being blacklisted as a result of the investigations into alleged Communist influence in the movie industry by the House Committee on Un-American Activities and unable to find movie or television work, Da Silva returned to the stage. He was nominated for the 1960 Tony Award for Best Featured Actor in a Musical for his role as “Ben Marino” in Fiorello! (1959).  Da Silva married actress Marjorie Nelson in 1949. After being blacklisted, Da Silva and Nelson left Los Angeles for New York to perform in The World of Sholom Aleichem. Da Silva and Nelson divorced in 1960.

Da Silva was nominated for the British BAFTA Film Award for Best Foreign Actor for his performance as “Dr. Swinford” in David and Lisa (1962). He was the narrator for the U.S. released versions of the British TV program Doctor Who. Da Silva portrayed Soviet Premier Khrushchev in the 1974 television docudrama The Missiles of October. He won the Emmy Award for Outstanding Performance by a Supporting Actor in a Comedy or Drama Special for his role as Eddie in Verna: U.S.O. Girl (1978) with Sissy Spacek.  Da Silva’s TV guest appearances, after the era in which blacklisting was strongest, include such programs as The Outer Limits, Ben Casey, The Man from U.N.C.L.E., The Fugitive, Gentle Ben, Mannix, Love, American Style, Kung Fu, and Archie Bunker’s Place.

Da Silva also played Franklin D. Roosevelt in The Private Files of J. Edgar Hoover (1977), Louis B. Mayer in Mommie Dearest (1981), “Angelo Dokakis” in Garbo Talks (1984), and Benjamin Franklin in 1776 (1972), as well as a documentary depicting the life of Ben Franklin shown at Franklin’s house in Philadelphia. He appeared in two different film adaptations of F. Scott Fitzgerald’s 1925 novel, The Great Gatsby. In the 1949 production with Alan Ladd as Gatsby, Da Silva played garage owner George Wilson; in the 1974 film with Robert Redford, Da Silva was Meyer Wolfsheim, the flamboyant gambler with the interesting cufflinks. He also did voice acting in 26 episodes of the popular 1974-82 radio thriller series CBS Radio Mystery Theater (between July 1974 and February 1977).