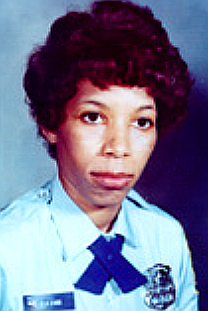 Gail Cobb, a single mother, gave birth to a son, Damon Demetrius Cobb, on February 26, 1970. Her son’s father, whom Cobb had met in high school, took no responsibility for his son, and Cobb ended up trying to raise him on her own. Cobb’s son is currently serving a life sentence in prison at the Western Correctional Institution in Cumberland, Maryland, after being found guilty of first-degree murder in a 1992 killing. Cobb’s parents stated in 1996 that they believed that her untimely murder influenced her son’s current legal predicament at the time. In October 1973, Gail Cobb applied to become an officer with the MPDC, much to the surprise of her family and friends, after the Washington, D.C., government lowered the height requirements for police recruits to five feet. Cobb herself was five feet tall, and graduated from her 34-member police academy class in April 1974, of which 13 members were female. She was well-liked by her trainers, who noted that she was hard-working. She spent most of her patrol work on foot and signed up for training to get a scooter license and was taking a night class to learn sign language. Late in the morning of Friday, September 20, 1974, around 10:30 am, two men, John Curtis Dortch, a 29-year-old Howard University graduate and former U.S. Army soldier from Silver Spring, Maryland, and John William Bryant, a 24-year-old man from Washington, D.C., began making their way to the Eastern Liberty Federal Savings and Loan bank at 21st and L Streets NW, disguised as construction workers, and each carrying a loaded sawed-off shotgun and handgun. They intended to rob the bank.

Two plainclothes police officers were alerted of the robbery in advance, and saw the two men on the street. The officers stopped them and asked them for identification, before the would-be robbers could even get inside the bank. The two men ran off in separate directions. Gail Cobb was still on probationary duty six months out of the academy and was assigned to foot patrol duty downtown, a block away from the bank. Cobb, who was writing a traffic ticket at the time, was told by a citizen that they saw an armed man run into a garage. Cobb followed the suspect and confronted him inside the garage as he was in the process of changing out of his disguise. Cobb ordered the man to place his hands on the wall. As she called for assistance over her radio, the suspect spun around and fired a single gunshot at Cobb at close range. The bullet went through Cobb’s wrist, shattering a wristwatch that was given to her by her mother as a birthday present, then through her police radio, where it then penetrated her heart. Cobb died at the scene at 20th Street and L Street, NW, and responding officers arrested the suspect at the scene. Gail Cobb had served with the MPDC for one year and was the first female MPDC officer to be killed in the line of duty, as well as the first African American female law enforcement officer to be killed in the line of duty in the United States. She is survived by her son, Damon Demetrius Cobb, and is buried at Lincoln Memorial Cemetery in Suitland, Maryland, near the border between Washington, D.C., and Prince George’s County, Maryland.