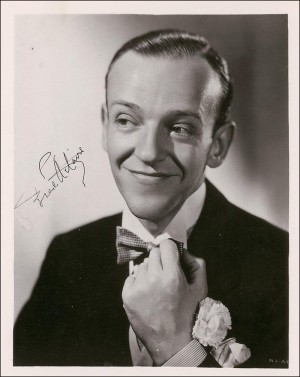 Born Frederick Austerlitz, Jr, in Omaha, Nebraska, and the son of an Austrian immigrant, he entered show business at the age of 5, working in both vaudeville and Broadway in partnership with his sister, Adele. When Adele left show business to marry in 1932, he headed for Hollywood. Signed to RKO, he was loaned to MGM Studios, to make “Dancing Lady” (1933). His big break came with his next movie, “Flying Down to Rio” (1933), when he was teamed with Ginger Rogers. Their dancing of the Carioca stole the show. Over the next six years, Fred Astaire and Rogers made eight more movies, all of them blending in astonishing choreography, brilliant songs by Irving Berlin, Cole Porter, and Jerome Kern, beautiful sets, and vintage comedy plots from vaudeville days. While all of their films together have a large following of loyal fans, many consider “Top Hat” (1935) and “Swing Time” (1936) as their best films of this period. Although he set the standard as a dancer, he also introduced more song hits than any other performer of his generation during this period. After Rogers left the team to concentrate on her acting, he continued his career, dancing opposite Eleanor Powell (“Broadway Melody” in 1940), Rita Hayworth (“You’ll Never Get Rich” in 1941), Bing Crosby (“Holiday Inn” in 1942), Gene Kelly (“Ziegfeld Follies” in 1946), and Judy Garland (“Easter Parade” in 1948) among others. He took straight acting roles in such films as “On the Beach” (1959), “The Pleasure of His Company” (1960), “The Towering Inferno” (1974, which earned him an Oscar Nomination), and “Ghost Story” (1981). He won one Oscar (1949), and three Emmys for his television specials and for a TV Movie “A Family Upside Down” (1978). He was considered by his contemporaries to be the epitome of elegance and grace, and always a true gentleman. The famous Russian dancer, Mikhail Baryshnikov, once said of him “I have been invited to say something about how dancers feel about Fred Astaire. It’s no secret that we hate him. He gives us complexes because he’s too perfect. His perfection is an absurdity.”