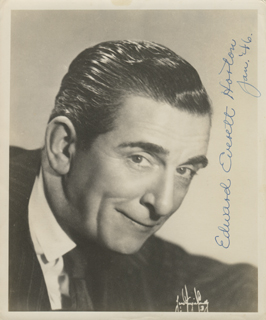 Horton started his stage career in 1906, singing and dancing and playing small parts in Vaudeville and in Broadway productions. In 1919, he moved to Los Angeles, California, where he began acting in Hollywood films. His first starring role was in the comedy Too Much Business (1922), and he portrayed the lead role of an idealistic young classical composer in Beggar on Horseback (1925). In the late 1920s he starred in two-reel silent comedies for Educational Pictures, and made the transition to talking pictures with Educational in 1929. As a stage trained performer, he found more film work easily, and appeared in some of Warner Bros.‘ early talkies, including The Terror (1928) and Sonny Boy (1929).

Horton originally went under his given name, Edward Horton. His father persuaded him to adopt his full name professionally, reasoning that there might be other actors named Edward Horton, but only one named Edward Everett Horton.

Horton’s screen character was instantly defined from his earliest talkies: pleasant and dignified, but politely hesitant when faced with a potentially embarrassing situation. Horton soon cultivated his own special variation of the time-honored double take (an actor’s reaction to something, followed by a delayed, more extreme reaction). In Horton’s version, he would smile ingratiatingly and nod in agreement with what just happened; then, when realization set in, his facial features collapsed entirely into a sober, troubled mask.

Horton continued to appear in stage productions, often in summer stock. His performance in the play Springtime for Henry became a perennial in summer theaters.

Horton’s companion for many years was actor Gavin Gordon, who was 15 years his junior. They both appeared (but shared no scenes) in only one film, Pocketful of Miracles (1961).

In 1925, Horton purchased several acres in the district of Encino and lived on the property at 5521 Amestoy Avenue until his death. He named the estate, which contained Horton’s own house and houses for his brother, his sister and their respective families, Belleigh Acres. In the 1950s, the state of California forced Horton to sell a portion of his property for construction of the Ventura Freeway. The freeway construction left a short stump of Amestoy Avenue south of Burbank Boulevard and shortly after his death, the city of Los Angeles renamed that portion Edward Everett Horton Lane. For his contribution to the motion picture industry, Horton has a star on the Hollywood Walk of Fame at 6427 Hollywood Boulevard.

In a scene in Friz Freleng‘s cartoon Hare Trigger, Yosemite Sam (in his debut) calls himself “the meanest, toughest, rip-roarin’-est, Edward Everett Horton-est hombre what ever packed a six-shooter!”