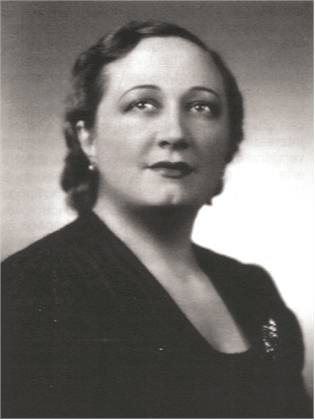 Ebe Stignani (10 July 1903 [or 1904] – 5 October 1974) was an Italian opera singer, who was pre-eminent in the dramatic mezzo-soprano roles of the Italian repertoire during a stage career of more than thirty years. Born in Naples in 1903 (some sources cite her year of birth as 1904), Ebe Stignani studied music for five years at the San Pietro a Majella Conservatory in Naples, including piano and composition as well as singing. The date of her singing début is usually said to have been in 1925 at the San Carlo opera house in Naples, in the role of Amneris in Verdi’s Aida, but there is evidence that she may have sung a number of roles in the previous year. In 1926, she was invited to La Scala Milan by Arturo Toscanini to sing the part of Princess Eboli in Verdi’s Don Carlo, and Milan continued to be a principal stage for her during the rest of her career. She sang all of the major Italian mezzo-soprano roles, but also tackled Wagner’s Ortrud (Lohengrin) and Brangäne (Tristan und Isolde), and Saint-Saëns’s Dalila (Samson et Dalila) conducted by Victor de Sabata. She appeared with the San Francisco Opera in 1938 and again in 1948 but never at the Metropolitan Opera in New York. She toured extensively in North America in the years after World War II. Her first appearance at Covent Garden was in 1937, as Amneris, and she returned to London a number of times, notably in the role of Adalgisa in partnership with Maria Callas’s Norma in 1952 and 1957. In the second of the two 1957 performances the thunderous and sustained applause after the duet Mira O Norma led conductor John Pritchard to encore that last part, apparently the only time she ever sang an encore in opera in her career. She also appeared frequently in South America, including the Teatro Colón in Buenos Aires, and in many other European cities outside Italy including Paris, Madrid, and Berlin (where she sang in 1933, 1937 and 1941). Among the new roles which she created during her career were Cathos in Felice Lattuada’s Le preziose ridicole (1929), and La Voce in Respighi’s Lucrezia (1937).

Ebe Stignani retired from the stage in 1958 after appearances in London (as Azucena) and in Dublin (as Amneris). Thereafter, she lived quietly in retirement at her home in Imola. She had married in 1941 and given birth to a son in 1944. Stignani’s voice was large and rich in tone, if sometimes hard-edged, and evenly balanced throughout its considerable range (extending from a low F to a high C). It had sufficient flexibility for her to undertake such roles as Rossini’s L’italiana in Algeri, but it was in noble, dramatic parts that she was heard to greatest effect. Critics often referred to the grandeur of her performances. By her own account, she was short and plump, and she admitted her shortcomings as an actress, but she achieved dramatic power and characterization through the quality of her voice and technique. She knew her priorities: speaking to Lanfranco Rasponi, she said, “I was given a magnificent gift, and in a way I am like a priestess, for I feel that it is my responsibility to keep the flame lit in the best possible manner… I am Stignani because of my voice”. She was highly disciplined in her choice of roles and in the number of appearances she made, refusing to take assignments which she felt were not right for her voice, and this no doubt contributed to the longevity of her career at the highest level.