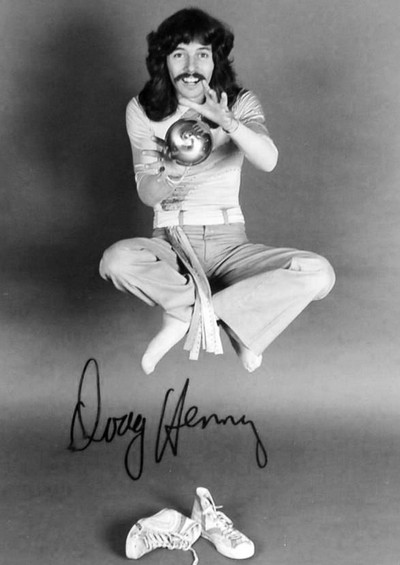 Henning was born in Winnipeg, Manitoba, began practicing magic at Oakenwald School in Fort Garry, and later moved to Oakville, Ontario.  He performed his first show at the age of 14 at the birthday party of a friend and was inspired by his audience’s spellbound reaction. Within a few months of placing an ad in a local newspaper, Henning launched a series of performances on local television in Toronto, and as an entertainer at parties.  He was a student at McMaster University in Hamilton, Ontario and studied psychology. Henning met Ivan Reitman there when he appeared in the 1968 Reitman-directed production of Li’l Abner in the role of Lonesome Polecat.  Shortly after university, Henning was awarded a Canada Council for the Arts grant. The terms of the grant required Henning to study magic. He did so, traveling to view first hand the talents of such magic greats as Slydini and Dai Vernon. Doug studied under Tony Slydini and considered him his primary teacher of magic.

With the intention of returning magic to its “glory days”, Henning worked to perfect his craft. Garnering financial support, he developed a live theatrical show, Spellbound, directed by Ivan Reitman, with music by Howard Shore and co-starring actress Jennifer Dale, a musical that combined a dramatic story and Henning’s magic tricks. The show opened in Toronto, where it broke box-office records. Henning reworked the show after catching the attention of New York producers, and took it to Broadway as The Magic Show, with songs composed by Stephen Schwartz. Debuting in 1974, the show ran for four and a half years, and earned Henning a Tony Award nomination.

Following his Broadway success, Henning approached NBC with the idea of producing a television special. It wasn’t until Henning suggested that he would reproduce live Harry Houdini’s famous and dangerous water-torture escape — for the first time since Houdini performed it himself — that the NBC executives signed him.  Henning spent the next eight months reworking his stage act for TV and practicing the water-torture escape act. More than 50 million viewers tuned in for the December 1975 broadcast of Doug Henning’s World of Magic, hosted by Bill Cosby. Henning successfully performed the water torture illusion, although he did not break Houdini’s time record. The event was the first of seven annual broadcasts, which would eventually bring Henning seven Emmy Award nominations, including two back-to-back in 1976 and 1977 for World Of Magic.

At the end of each World of Magic performance, Henning addressed the audience with the same monologue: “Anything the mind can conceive is possible. Nothing is impossible. All you have to do is look within, and you can realize your fondest dreams. I would like to wish each one of you all of life’s wonders and a joyful age of enlightenment.”  In 1977, Henning co-wrote a biography of Houdini, Houdini: His Legend and His Magic. He created illusions for an Earth, Wind and Fire tour in 1979, and for two of singer Michael Jackson’s concerts, including his 1984 Victory Tour.

In 1980, Henning appeared on The Muppet Show where he performed several acts. He demonstrated chink-a-chink for Kermit the Frog’s nephew Robin, segmented a Muppet monster into four pieces (and put him together wrong), and performed what he called “metamorphosis”: a bit where he swapped places with an assistant who was locked inside a trunk.  Henning divorced Barbara De Angelis in 1981 and married Debby Douillard in the Ladies’ Dome in Fairfield, Iowa, in December of that year.  In 1983, Henning was the producer and star of the Broadway musical Merlin. In 1984, he began a solo show on Broadway called Doug Henning and His World of Magic.  In 1985, a set of plush toys called “Doug & Debby Henning’s: WONDER WHIMS” were made by Panosh Place and copyrighted by Marvin Glass and Associates. They were an attempt to get children to appreciate the magical wonders in the world around them. There were a total of six Wonder Whim characters. Each came with an animal friend, a personalized story, and a magic kaleidoscope wand of colors and patterns.

In the mid 1980s, Henning retired from the stage and had an increasing interest in Transcendental Meditation. He received a Ph.D in the Science of Creative Intelligence from the Maharishi University in Switzerland.  In 1992, Henning and Transcendental Meditation founder, Maharishi Mahesh Yogi drafted plans for a $1.5 billion-dollar project called “Maharishi Veda Land” near Niagara Falls, Ontario that would “combine astonishing, unique visual and sensory effects, state-of-the-art 3D imagery, and ultra high-tech entertainment technology with his best and most original magic illusion secrets”. Attractions were to include a building suspended above water and a journey into the heart of a rose but as of 2000 the project’s status was uncertain.

In 1992, Henning was a Natural Law Party candidate in the United Kingdom’s general election, contesting the Parliamentary constituency of Blackpool South in Lancashire. As a Canadian citizen, Henning qualified as a candidate under British electoral law, which allows candidates from Commonwealth nations. He finished fourth of four candidates, polling 173 votes. He was senior vice president of the Natural Law Party of Canada (“NLPC”), and ran as the party’s candidate for the former Toronto riding of Rosedale in the 1993 federal election, finishing sixth out of ten candidates.

Henning died aged 52 in February 2000 at Cedars Sinai Medical Center in Los Angeles five months after being diagnosed with liver cancer. His ashes were scattered in the Pacific Ocean off Redondo Beach, California.  James Randi, a fellow Canadian magician and prominent skeptic, was critical of Henning’s involvement with Transcendental Meditation (TM). In 2008, Randi asserted in his blog, SWIFT, that TM founder Maharishi Mahesh Yogi had “caused the death of my friend Doug Henning”. He claimed that Henning had immersed himself so thoroughly in TM that he “abandoned regular medical treatment for liver cancer, continued to pursue his diet of nuts and berries, and died of the disease.”  In 2005 a handwritten letter, from Doug Henning to James Randi, was placed for auction on eBay, unbeknownst to Randi. When Randi learned of it, he announced on his blog that the letter had been “stolen” from his files. A week later, Randi wrote that he “managed to have the sale stopped”, and that the letter was back in his possession, but did not elaborate on further details of the controversy.  On June 8, 2010, it was announced that Henning would receive a star on Canada’s Walk of Fame. His “Zig Zag Girl” illusion is housed at the American Museum of Magic.