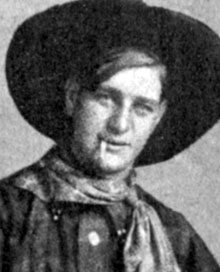 Rodeo cowboy and film star Artemus Ward Acord was born on April 17, 1890. His birthplace seems to be somewhat in question. Some say it was Stillwater, Oklahoma Territory, but others believe it to be in Utah, with the family then moving to Stillwater. In either case, Acord displayed his cowboy skills early in Stillwater. At the age of nine he was a full-time wrangler on a ranch near town. As his riding skills increased, Acord began rodeo competition around the country. In 1909 he was hired by the Dick Stanley–Bud Atkinson Wild West Show to perform the daring riding stunts for which he had become famous.

About this time, Acord began appearing in silent films, a fledgling business. His professional rodeo skills made him a believable and “real” cowboy on the screen. In 1914 his breakthrough movie role came in Buck Parvin in the Movies. Acord was a popular movie cowboy, appearing in over a hundred films. He worked for studios including American, Fox, Universal, and Blue Streak Westerns.

Acord played in a few sound films at the end of his career, but by the time of his last silent movie, The White Outlaw (1929), he was looking tired and worn. His lifelong fight with alcoholism had taken its toll. He would sometimes disappear for days at a time, causing a shutdown in film production. The major studios eventually lost interest, leaving only the low-budget film companies to work with him.

Art Acord died in a hotel room in Chihuahua City, Mexico, on January 4, 1931. The official cause of death was a stroke brought on by alcoholism. A true cowboy both on and off the screen, Acord, with his horse, Raven, was applauded by youngsters throughout the country. His action-packed westerns created one of the earliest movie screen heroes.